SPRINGRIDGE, LA (KSLA) – The Bossier Parish Police Jury wants to crack down on oversized and overweight loads on parish roadways, concerned about safety and crumbling roads. Now Caddo Parish considering doing the same, as the “heavy traffic” begins to pick up right along with drilling in the Haynesville Shale.

“We’ve noticed more loads coming through but it’s not always local pilot cars that get those loads,” says Karen Fory, part of the husband and wife team that operates Frog Truck Escort, LLC. “We haul everything from bulldozers to windmill towers to compressors and derricks and oil rigs, swimming pools,” says Fred Fory, “anything that’s over 12 feet wide or over 15’6″ high.”

The Forys see the road as an obstacle course the mammoth loads they help to move, “We have to keep them guys away from mailboxes, we have to try to zigzag them through the limbs and lines,” explains Fory. On top of that, they’re keeping an eye on traffic in all directions, using flashing yellow lights and flags and waving with their signature neon green gloves to get the attention of oncoming drivers and let them know what’s ahead.

On Thursday, the Forys escorted a Nomac drilling rig, over 16′ high and 80′ long 40 miles from one drill site in Hunter, Louisiana to another Chesapeake site in Springridge. It’s the kind of job the Forys are expecting to see more of as drilling activity continues to ramp up in the Haynesville Shale.

The couple started their own pilot truck business a few years ago, and have been all over the country guiding all kinds of oversized and super-sized loads. Now, Karen Fory says they’re hoping the demand for local pilot trucks picks up, as more rigs and equipment are expected to be brought in to keep up with all the drilling planned this summer. “Of course the rain has slowed down a lot of it. Once this rain finally moves out of here, everything’s going to really pick up.”

Simon Hasan owns the Triple J truck stop at Greenwood Springridge and Colquitt Road in Springridge, where the intersection has become a crossroads for super-sized loads. “Big rigs, big equipment that I’ve never seen, they just go down this way, back that way, this way. It’s rigs everywhere!” Hasan says he’s seen them struggle to negotiate the turns at the intersection, pointing to a sign on one of the corners, “They just can’t make a turn, they always hit that sign. They have to stop traffic, for about 100 feet to 200 feet away from the intersection in order for those trucks to make a turn.”

“We have hardly any shoulders,” Karen Fory explains, “It’s hard to turn for some of these loads. And they send these loads on these back roads. These little bitty roads. The rigs we’re moving are centralized in a small area right now, and it’s in an area that’s full of nothing but back roads.” Shoulder-less back roads and narrow bridges make for a tight squeeze sometimes, especially when their efforts to alert oncoming traffic go unheeded. “We have people that don’t pay attention to our lights, they’ll be on the cell phone. They’ll be just totally distracted, not paying attention at all, and by the time they come up, it’s a little too late!”

Which is why Karen Fory says a little extra attention and a wider berth goes a long way. “And it doesn’t mean you have to get completely off into a ditch. Just give a little room. That’s all we need is a little room to get the loads through. We’ll be outta your way and gone.”

The State of Louisiana already has regulations in place governing size and weight limits, and requires permits for their passage on state roadways. On Thursday, the Bossier Police Jury adopted regulations for parish roads that mirror state laws. Bossier Parish Administrator Bill Altimus says they have shared their newly passed ordinance with Caddo’s administration. Caddo Parish Commission Assistant Administrator Randy Lucky says they’re considering doing the same thing, “We don’t want our roads beat up, either,” Lucky says. But he adds that it would cost money to institute new rules, which would include a permitting process and the costs of enforcement. 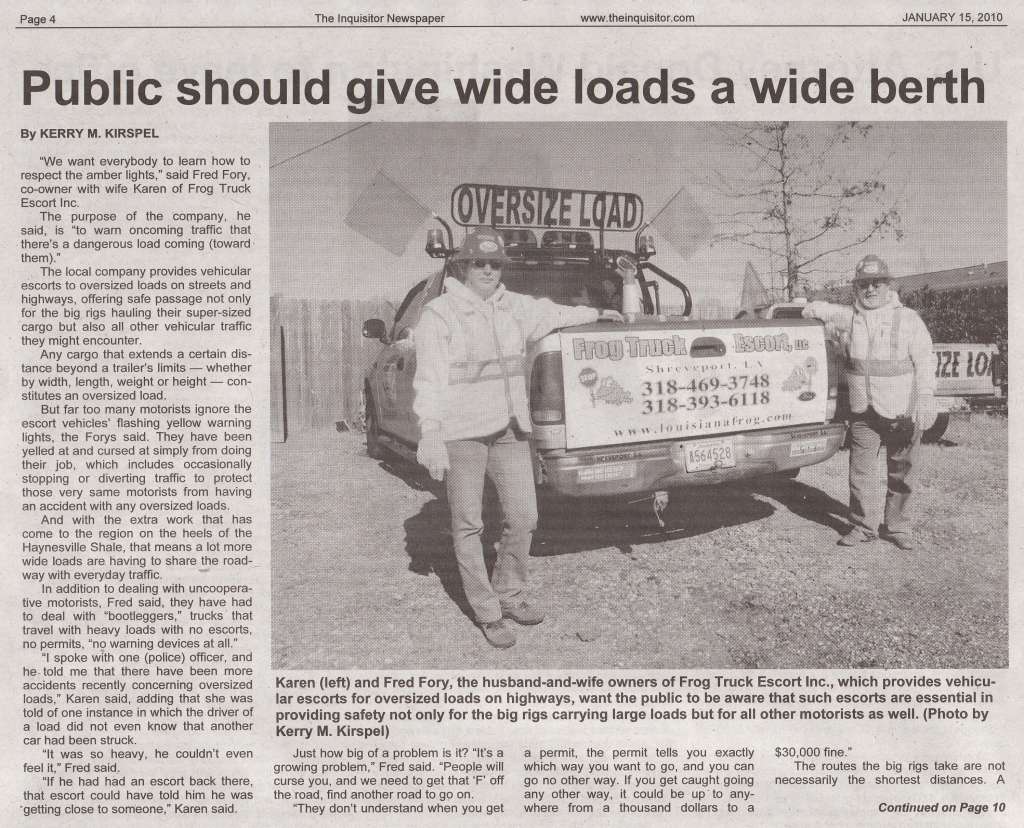 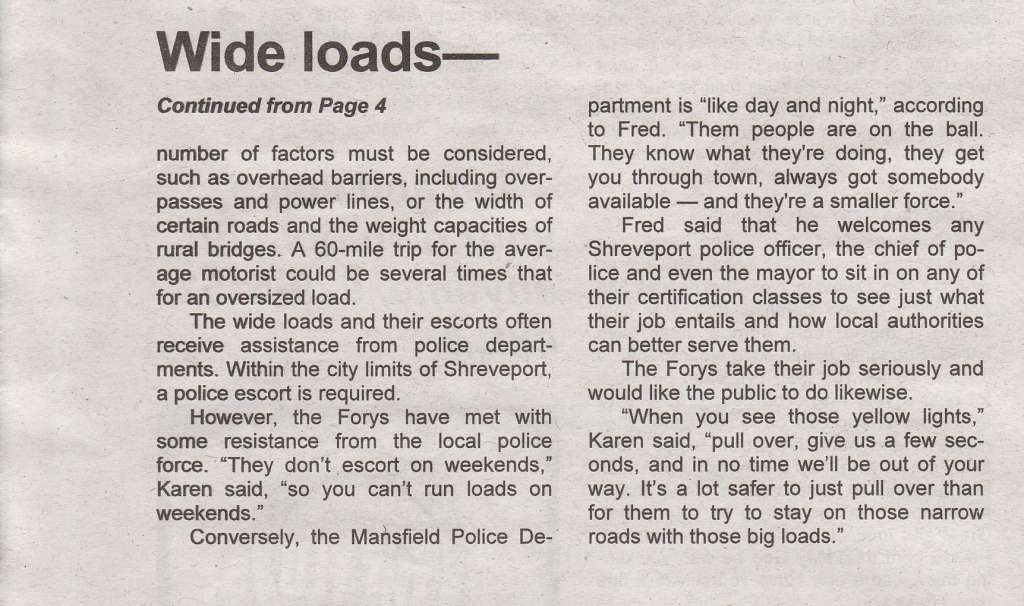